It’s safe to say that the short journey to Singapore from Phuket, felt like a long one. Jet2, the Ryanair of the Southern Hemisphere, actually that’s not fair – the EasyJet of the Southern Hemisphere, wasn’t the best place to be stuck after having been under attack by bedbugs. Luckily though we were leaving the shabby island bamboo huts of Koh Phi Phi for a much bigger and more polished island and even better – a nation known for their cleanliness!

We were staying in Little India because that’s the only area we could afford – man is this country expensive! Particularly heart-breaking is the price of beer! Clearly Little India was supposed to be the less desirable area of Singapore but to be honest by our standards it was still pretty nice! The room was modern and clean and the size of a broom cupboard. It was lovely though, you just couldn’t move much. And there wasn’t really room for our bags and the stuff in our bags.. and us for that matter but who cared, it was clean!

It’s weird being in a proper big city after a lots of time on islands and beach resorts – suddenly there’s too much to do and it’s just too big to cope with. All of a sudden you have to use inner city transport again.. weird. I like to think of Singapore as Asia’s London. Super swanky and metropolitan in parts intertwined with historic buildings and a meeting point for a vast amount of varying different cultures. But it is still very much Asia. You’re never far from a market, world class street food, beautiful temples and the humidity is also something, despite the pollution, that London could never compete with.

After a good few days exploring our new environment, New Year’s Eve was suddenly upon us. The most overrated night of the year with the added pressure of being abroad. What to do when there is just two of you in an unknown city for New Year’s Eve? There was a massive beach party on Sentosa Island which looked very cool and very expensive and quite frankly too cool for us. In order to be a part of this super cool party you had to have been very organised and bought tickets ahead of time. Not only were we not cool enough we were also definitely not organised enough. In addition, you had to get the cable car over there and then you had to be there for a certain time and argh that was all just too much! Bound to be an absolute bloody disaster! So instead we thought of a simpler and lazier plan. Why not have a few drinks in our hotel – good old ‘pre-drinks’ (do people still pre-drink?) and then go to Clarke Quay and watch the fireworks over Marina Bay Sands. Ahhh perfection. It would have been perfection if we’d bought our alcohol in good time. However, like the ignorant English pigs that we were we thought we could just nip to the shop just before we wanted to start drinking. Turned out some shops don’t sell alcohol after 6pm! Duh! I get it but surely it makes logical sense to only serve alcohol after a certain time not before! Beer at 10am no problem, 7pm – what the hell are you doing?! Completely non-sensical! It makes even less sense to stop selling it at that time on New Year’s Eve when even the most conservative people have a little tipple. So remember that folks. We went to several other shops nearby and all had stopped so eventually we had to convince one very nice, easily influenced shopkeeper to let us lean behind the blinds and purchase some cans because of our desperate state! 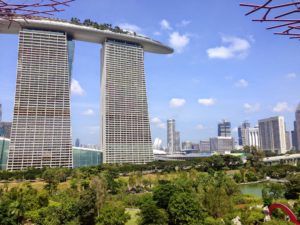 Back at the hotel room pre-drinking got underway, sat legs crossed on our bed with some old style tunes not quite blasting out on our budget speaker. Not the most successful pre-drinking in the world. We then made our way to Clarke Quay where the bars weren’t as badly busy as you might imagine. There was an Australian bar on the corner which I’d decided was my favourite. And there the festivities got underway and we made some friends – oh joy, friends! While Tom was queuing for the bar a ‘friendly’ Australian started making light conversation. ‘Are you English?’ He asked. To which Tom replied ‘Yes’. Only for the return statement to be ‘Well don’t be a dick!’. Tom, who could indeed be a dick on occasion but had not at this point been a dick nor demonstrated dick like qualities, was very taken aback and offended. Causal English prejudice – it’s a hard life. We moved on from the outrageous incident pretty quickly and decided he wasn’t to be our friend.

The rest of the night was pretty average to be honest. It was warmer and prettier than spending it in England but more expensive. Once the fireworks started though everyone just stopped and stared and it was a sight to behold. The huge Marina Bay Sands Hotel which looks like a boat on top on three pillars was lit up with the fireworks breaking above its head. It was all quite impressive. Apart from a really annoying man with silly string being a pain in the ass, it was uninterrupted imperfect greatness and one of those surprisingly rare ‘wow’ moments. 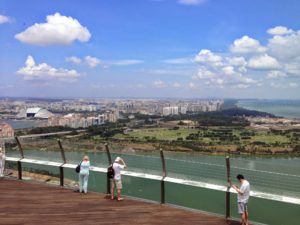 Several Singapore Sling knock-offs later I find myself very pissed having had enough and only able to think about McDonalds and bed. When I had finally found the golden and glorious M, I was so pissed and so furious because they were only doing McDonalds Breakfast! Of course, they were as it was indeed the morning but I was not willing to understand this at that moment. All I wanted was a Double Cheeseburger Set (what they call a Double Cheeseburger Meal in Thailand. I don’t know what it’s called in Singapore and so that added to my problems in trying to order one). It was Tom’s fault of course that there were no Cheeseburger Sets and so I grumbled at him and stormed off in absolutely the wrong direction to our hotel. Absolute idiot. I would have left me but instead the night ended with Tom following me around at a safe distance, humouring my tantrum and sticking to my parent’s stiff words of ‘never leave her side’. Eventually I realised that if I couldn’t navigate myself out of a paper bag while sober, I was never going to be able to do it now while off my rocker in a city I’d been in for about 2 days. Tired and calmer, I eventually let him walk with me while munching contently on his own McDonalds Breakfast, guiding us back to our high-rise box. It wasn’t the best New Year’s I’ve ever had, or the worst but it was the biggest tantrum I’ve ever had over a cheeseburger and so it’s up there with the most memorable. Turns out the Australian wasn’t far off with his ‘Don’t be a dick’ comment, he just chose the wrong English pig.