It was a complete shock to the system but surprisingly, we slotted into the life here quite easily and quickly. The main thing which, to some, may be the biggest thing to become accustomed to, was the absence of Wi-Fi on the orchard. Being in a foreign country with an English phone meant that 3G wasn’t an option either. So Tom, Claudia and I had a little daily routine; after work we’d cycle down the road to the country market, where some of our fruit was sold, and we’d sit, eat a Cornetto and check our phones, before heading back for a chilled evening. Weirdly, I don’t remember feeling disconnected at all – that was enough. After our short dose of the outside world, we’d spend our evenings hanging around in the communal room, where the French and Germans would be all European, cooking up wonderful feasts and Tom and I would continue to overcook our pasta and cheese sausages.

The group dynamic worked really well to begin with but like any Big Brother style situation, the cracks didn’t take long to show. It began when Henrik kept trying to turn apple picking into some sort of bizarre competitive sport. There were snide comments made and disagreements over where the tree boundary lay and therefore who was entitled to pick which apples. It was all very serious stuff.

I know it sounds petty but when you’re in an enclosed leafy space, with your life dominated by apples, tree boundaries become a very important thing. Tom and I however were not a threat to the egos of the serious apple pickers. We bumbled along at a reasonable rate often only reaching the minimum target. I was practically useless and it’s a wonder they even let us stay, I think it was our winning personalities. Anyway, that meant that generally our boundaries were left alone. If anything, they probably even courteously left a few hanging our way to make us feel better.

Jean and Henrik on the other hand were like the All Blacks and Wallabies of the apple picking world – speeding ahead of each other and apple grabbing left, right and centre. The atmosphere went from light and jolly to oh so dark. We once had shared bouletten (a squashed German meatball) but all of a sudden, our groups had separated. One group who liked to have fun and one who thought all fun should be banned unless you had picked all of the apples. Thank God I was in the first group, because I like fun and don’t like picking apples. 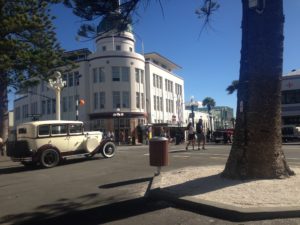 The pinnacle moment that it changed was when Jean decided to pull Henrik up on his apple grabbing! Eeek! Needless to say, it did not go down well. From then onward Henrik and Alana branded us as piss heads, which wasn’t far from the truth, but I was insulted all the same. Because of this they portrayed themselves as wholesome and some sort of superior backpacker. As if there was some sort of superior backpacker – we all needed money and had resulted to one of the hardest forms of manual labour to get it. There was no room for superiority here. Before we’d arrived, I was worried about making friends, but I hadn’t even considered the idea that there would also be tons of people I disliked. These two were merely the first. It wasn’t pleasant but for once I was on ‘cool’ team with more members which was very exciting!

Most of this rivalry was all very subtle and to be honest all a bit sad. Most of it just involved one side tutting (oh how very British) and then the others being outraged that they would ever dare to tut. However, one of the key moments really stands out for me and I remember being really angry about it. Hawkes Bay is really well known for its wine and there was a lovely cycle trail you could go on to visit all the wineries, one being Mission Estate which is the oldest winery in the country. The number one coolest gang aka ‘Us’ decided to go off together and embark on this trip. As we were getting ready to leave, we realised that those territorial bastards had taken the good helmets from the communal helmet holding area! You can sense my anger – it’s all coming back to me. They’d locked them in their room! The absolute cheek of it! It’s not unfair to say that Tom has quite a large head and there was only one that fit him properly. Because of their selfishness, he had to squeeze it into one that was much less suitable.

Despite this mishap throwing our plan off course briefly, we had a great time that afternoon. Mission Estate was beautiful and the guy who did our wine tasting was from Essex. Oh how we all laughed when he made Tom and I the butt of the joke in being ignorant about wine. It was accurate, but he’d wrongly assumed the Brazilian in the group would be similar in behaviour to the French. Claudia gulped each wine so fast I’m pretty sure she wouldn’t have been able to tell the difference between citrus or oaky flavours. Absolute barbarian! My highlight of this, was when the build-up of these little glasses of wine consumed throughout the day suddenly hit as we were cycling home. Merrily cycling home just as sunset begins after a long and wonderful day is truly brilliant! At least until you realise you’re going home to Mr and Mrs aggy! 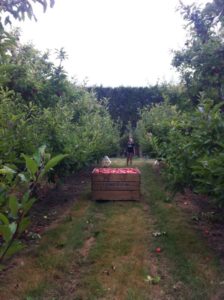 Eventually we got used to living our separate lives quite contently while we plucked the rest of the trees bare. We were civil enough with our never to be best friends that I was actually quite offended when they offered out their homemade peach preserve pie to the owners of the orchard and not us. Not one slice! You’d think they’d offer us something since we had to watch them pick up the mouldy peaches off the ground, sit in the same room while they stewed them for hours on end; and then load, no joke, about 20 jars of the stuff into their car! It was as if they were going off to hibernate in the woods or something. Weirdos!

As the first half of the season was ending, they buggered off early, leaving our gang of five left in the house rather blissfully. After over a month of constant fruit picking we were starting to feel the strain and so we’d go frequently to the Ocean Spa in Napier to take the pain of the day off. As soon as you sat in the hot pools all your limbs would start to ache. We all had scratches over most of our arms and as soon as you sat in the hot water you could feel it getting better. After 6 weeks of climbing up and down ladders all day with apples strapped to your front we were all starting to have enough. Apple picking is one of those jobs that seems almost romantic. The simple life. You pick the food, you eat it. After a while it wears off and is just plain hard work.

Claudia was a biology teacher in Brazil and wanted to work in aquaculture. I’m still not really sure what aquaculture is but not long after the German’s left she went to go and work on a Salmon farm. The weekend before she left and before we were given a well-deserved two weeks off, the city of Napier celebrated its annual Art Deco weekend. This is when the city transports itself back to the 1930s to match with its architecture. They bring out the old vehicles, the clothes, the music and dancing – the city completely immerses itself in the era and everyone takes it seriously. So, for our last night as our little ‘cool’ gang we sat on the sea front with bottles of Mission Estate wine, with Frank Sinatra and the like playing loudly in the background from the nearby stage.

It was almost movie perfect until I ruined the ambience by very badly attempting to swing dance with some professional swing dance dude who’d come all the way from New York. Even with this embarrassing episode, it was truly wonderful. As with most things in life, unfortunately it was just as it all was coming to an end that I realised how at home and content I felt. Without even being conscious of it, I’d made the friends I had worried about making and made the enemies I didn’t know I wanted. 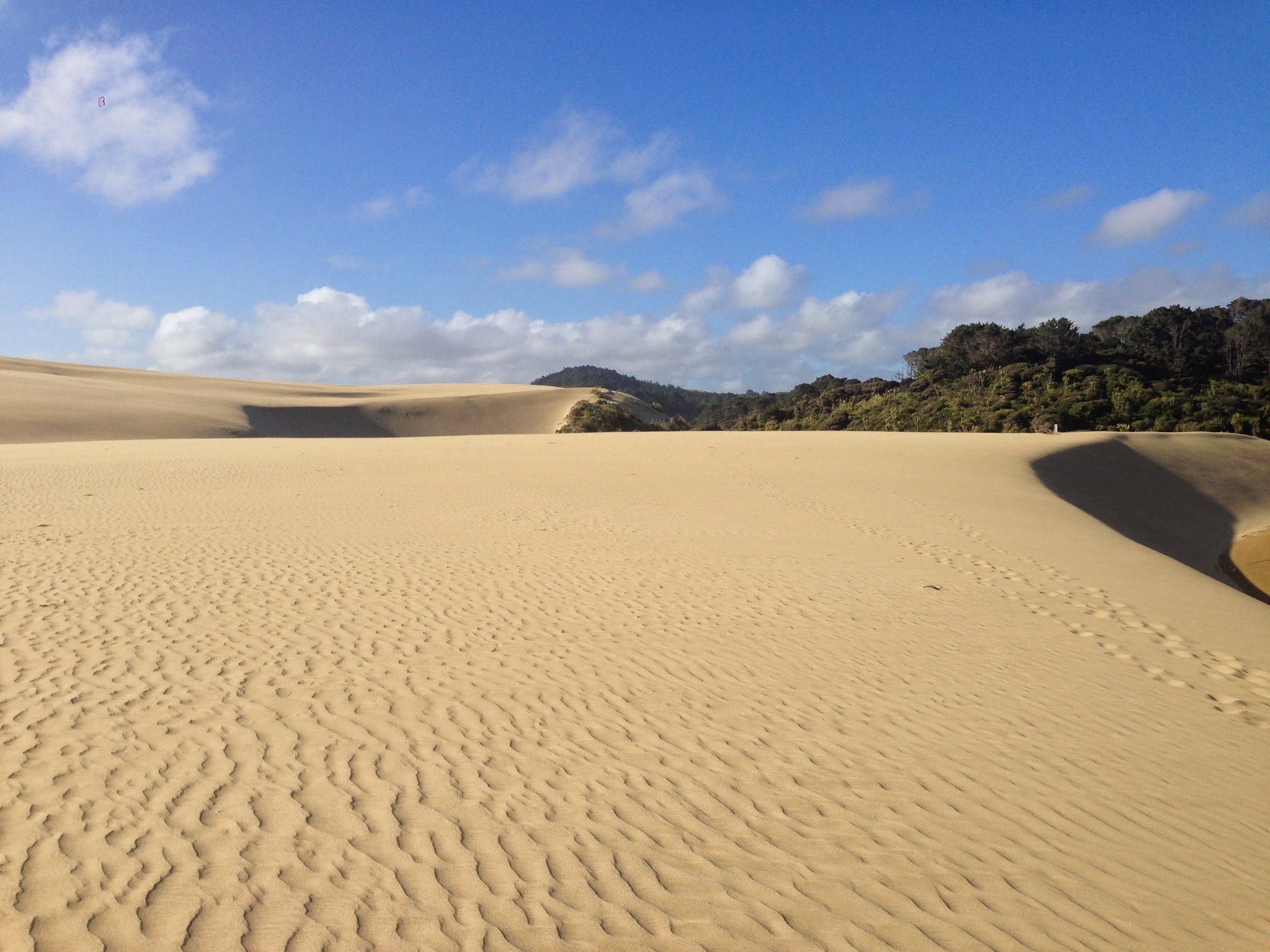